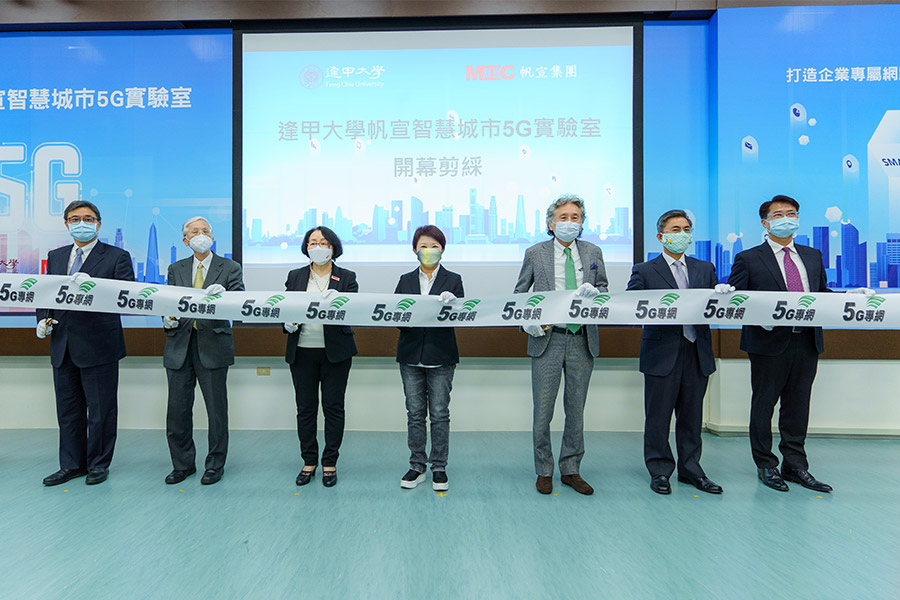 President Lee said that the 5G communication environment development of future industrial application service systems is the most important trend for the next generation. This year, Feng Chia University and Marketech International Corp will cooperate on various topics especially when artificial intelligence and IoT technics are mature. Both put in hard and software to construct indoor and outdoor 5G enterprise dedicated base stations and core network equipment. This year the main cooperation would focus on intelligence manufacturing, intelligent transportation, intelligence teaching, intelligence industry safety, and intelligence disaster prevention and relief. The indoor area will focus on smart manufacturing R&D, while the outdoor will focus on the integration of 5G networks into Taiwan's current disaster prevention and relief systems. President Lee also expressed his gratitude to the world's leading 5G base station manufacturer-Nokia, for helping to build the only 5G private network lab on campus in Taiwan. 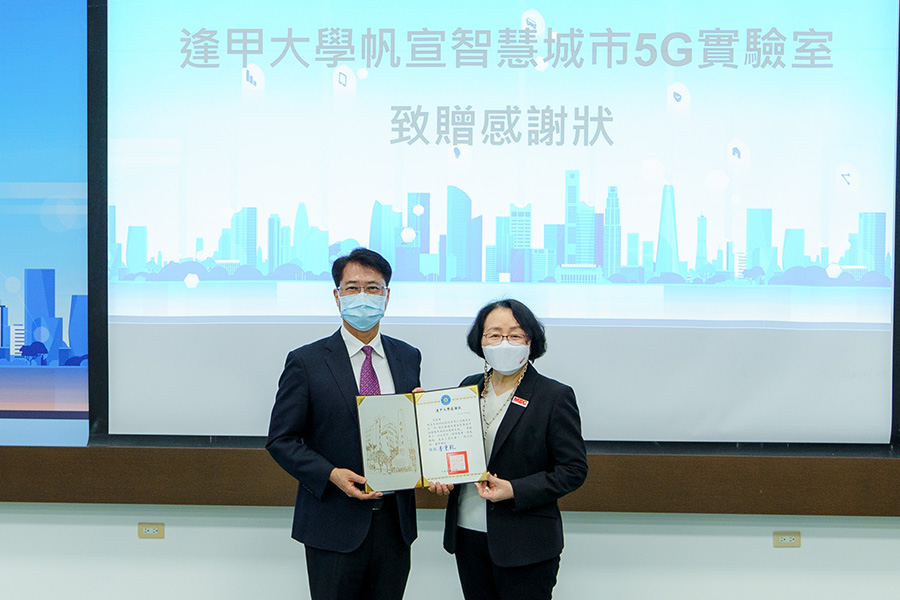 Mayor Lu thanked Feng Chia and MIC for our efforts in enhancing Taichung's smart city technology applications. Currently, Taichung City has successfully held the "Autonomous Bus 2.0 project in the Shuinan Trade and Economic Park and will be moving towards 3.0 in the future. Through the successful ride, it will become a leader in the field of precision machinery and artificial intelligence control in the central part of Taiwan. The Taichung City Government will also set up the International Convention and Exhibition Center, Green Museumbrary, and Taichung Dome in the Shuinan Trade and Economic Park. All these hardware development are available to combine with relative manufacturers with this lab to offer cultural, educational, and entertainment services, it is something that we, the citizens of Taichung, deeply expect. 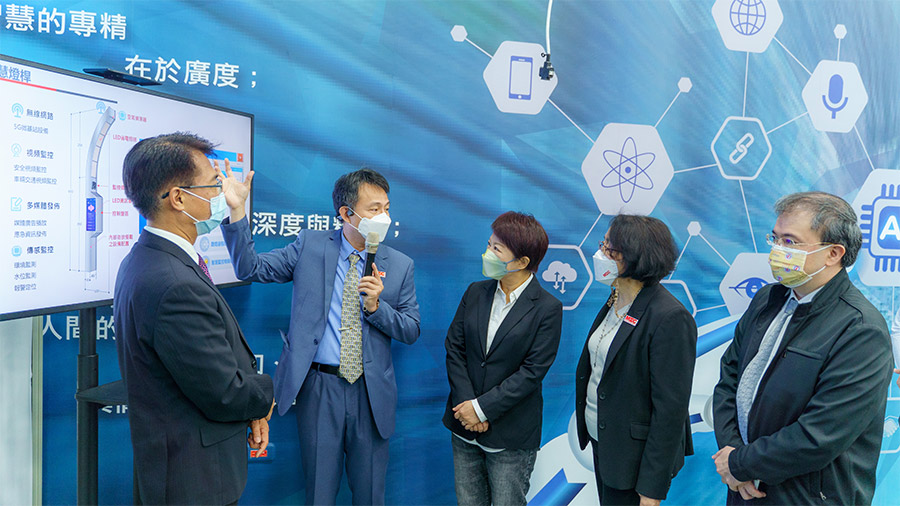 Marketech International Corp. Mr. Chen(second on the left) explained the construction of the 5G Smart City Laboratory to the Mayor of Taichung City Ms. Lu.

IMC's private network technology and experiences combine with our R&D energy, plus the location of the campus makes the Chairman of MIC Ms. Gao really confident with such a strong team. It is expected that the research will bring up the speed of offering more services to local governments and private enterprises in Taichung.

The opening ceremony showcased the laboratory space and the application results of various themes. The lab has an indoor and outdoor 5G enterprise base station, core network equipment, and full-size indoor and outdoor experimental areas. The indoor area covers more than 661.16 square meters and it is used for system integration and testing of the research such as intelligent manufacturing, intelligence housing, intelligence performance, and intelligence medical treatment. Moreover, the 5G core network system develops tests. The outdoor area is for the integration of disaster prevention and relief systems, intelligence poles, mobile information collection systems (such as autonomous vehicles or UAV carriers), and the integration and testing of projects required for various smart city needs. 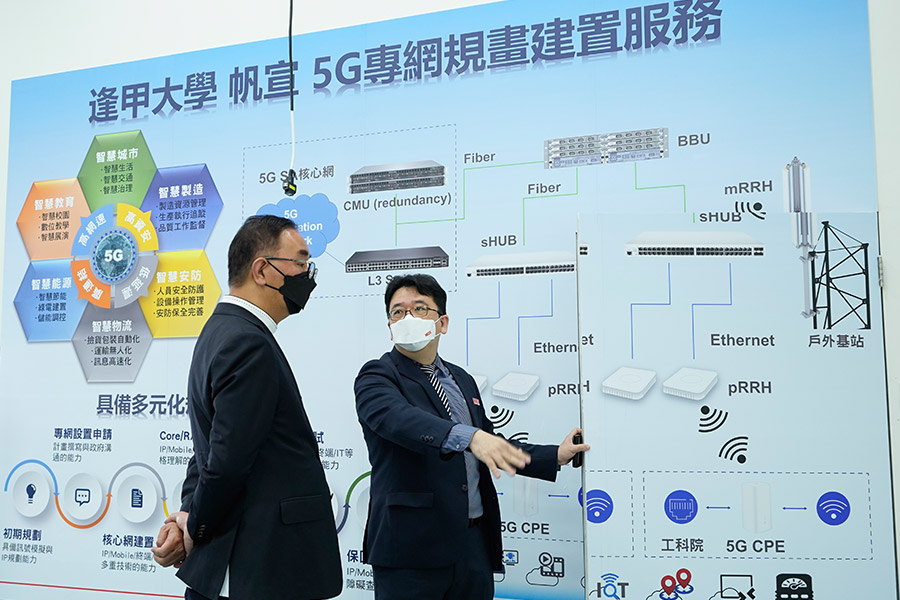 Multiple apply results of the 5G Smart City Lab had exhibited in the ceremony.

With the establishment of the new lab, Feng Chia and MIC also hope to integrate the output capacity of the domestic city industry and implement intelligence city R&D and industry technical staff training. Build a national team of intelligence cities with planning, design, system integration, and construction capabilities to capture the global intelligence city business opportunities of over US$2 trillion in the future.

Abundant research and development energy, more than ten teachers in Fengjia are among the top 2% scientists in the world

According to the list of the top 2% of scientists in the world published by professors of Stanford University in the United States in October 2020, there are 17 teachers and faculty members of our school. The list uses the long-term research results of scientists in various fields covered by more than 22,000 journals collected by the Scopus database, and is based on standardized literature citation index evaluation data, accumulated to the end of 2019, including paper citation status and H-index Number with co-authors, etc.

Feng Chia University's UAV academic examination room was officially opened in December. It is Taichung's first university to have a professional flight field.