Professor Zhang Chengxin won another highest award this year-CS Fellow of the Computer Society of the Republic of China.

Since 2013, the society has awarded 1 to 2 Fellows annually to the academic community and the industry who have contributed most to Taiwan’s IT technology. In the past, three academicians of the Academia Sinica, two presidents of the Executive Yuan, two university presidents, as well as the chairman of Acer Computer, the chairman of Pegatron United Technologies, and the chairman of ASUS Computer have been awarded this honor. The other winner this time is the chairman of Lingqun Computer. The two newly appointed members received awards and commendations at the Taipei National Army Heroes Hall on August 28.

Professor Zhang, who is known as the "Father of Cryptography in Taiwan", whose main research areas are: database design, e-commerce security, electronic multimedia imaging technology and computer cryptography, etc. His research results have repeatedly created world-famous achievements, not only in international electronics and motors. Fellow of the Institute of Engineers (IEEE Fellow), Fellow of the Institute of Electrical Engineers of the United Kingdom (IET Fellow); In 2010, he won the second place of the world's most fruitful DBLP research and creation achievements. In 2012, he won the Asia Information Security Lifetime Achievement Award. In 2017, Guide2Research Global The academic influence in the field of computer science ranks first in Taiwan, and the number of awards is hard to count.

Lecture Zhang once stated in his self-report: "I often think that research is a very interesting thing. The most wonderful experience is to find that the method I came up with in the experiment has defeated the best method in the world. This feeling It’s as exciting as winning a gold medal in the Olympics.” The information security technology he studied includes the high-speed computing of cryptographic modules, which has a profound impact on the world. Nearly 1,200 papers have been published in internationally renowned academic journals. He has written many information technology textbooks. There are 38 books, especially the original version of "Steganography and Watermarking" issued by Nova Science Book Company in the United States, and has 17 domestic and foreign patents.

Since his appointment as a professor at Yiwu University in 2005, Professor Zhang has always insisted that Feng Chia University has provided him with a good academic environment, enabling him to achieve good research results without distraction. Under his guidance, more than 250 masters and doctors have graduated. Professor Zhang emphasized that it is his unshirkable responsibility to help the country train talents. There is no limit to learning, and no limit to teaching. Just like the motto on his website: "Teach thousands of students, teach people to seek truth; learn thousands of courses, learn to be a real person." He will continue to study in this field and pursue perfection, Never slack。 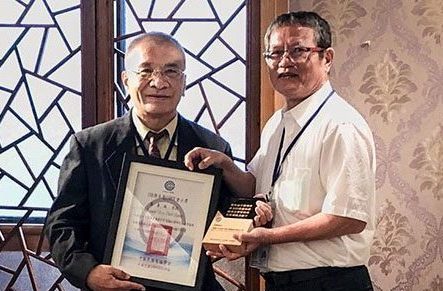 Professor Zhang Chengchen (left), was awarded the 108th Fellowship Award of the Computer Society of the Republic of China.

In April, Common World Magazine announced the results of the 2020 "Excellence in University Social Responsibility". Feng Chia University's "student-oriented, teaching-oriented" spirit of running a school was highly recognized, and it was ranked first among private schools for two consecutive years. Due to the impact of the epidemic, a grand awards ceremony was postponed to September 4. President Lee, Bing-Jean led a number of teachers and students from the school to attend and receive the honor in person.

The National Rehearsal/Finals of the General Group of the College Baseball Sports League will be played on Shezi Island, Taipei from March 4th to 19th. The Feng Chia University Baseball Team entered the national rematch with the first place in the Central District. Taipei Ocean University of Science and Technology lost 7:3 and finally won the second place in the team.